[Top Ten Tuesday: Books I'd Give To People Who Have Never Read YA Historical Fiction] 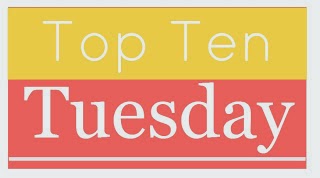 Top Ten Tuesday is a weekly linkup hosted by The Broke And The Bookish!
I'm a huge fan of Historical Fiction novels. I think that they are some of my favorites. I guess it stems from being able to learn about history and having a captivating story at the same time. Sure, it's not always 100% accurate, but once again, it is called fiction for a reason. Here is my list of Historical Fiction for people who haven't read it before...

"Code Name Verity" and "Rose Under Fire" by Elizabeth Wein: These books are companion novels, but you can read them separately and out of order. They take place during World War II and both stories gives us a different look into the war by featuring female pilots in the Royal Navel Fleet!

"In the Shadow of Blackbirds" by Cat Winters: This book dives us right into World War I. It deals heavily with spiritualism, the Spanish Influenza and a wonderful creepiness factor. It doesn't focus 100% on the war and dips into other issues on top of it!

"Prisoner of Night and Fog" by Anne Blankman: What if you were raised as Hitler's niece in Nazi occupied Germany? That's what this book asks. It's wonderfully terrifying and gives us an inside look into Hitler's rise to power all through his fictitious niece.

"All the Truth That's in Me" by Julie Berry: This one is a bit of a shocker. The main character vanishes and when she comes back part of her tongue is missing, leaving her in silence. It's not clear when this book is set, but it's definitely Historical Fiction and the writing is brilliant!

"Rouge" by Leigh Talbert Moore: I love this book so much. It's a New Adult set in a cabaret in New Orleans at the turn of the century. It's twisted and dark and delightful. If you're in the mood for a NA, this is one to check out!

"The Diviners" by Libba Bray: Okay, so this book is a beast, but reading all 600+ pages is totally worth it. This one is set in the roaring 20s and has all the normal trappings, but on top of that, murders are going on! It's one heck of a thrill ride!

"A Mad, Wicked Folly" by Sharon Biggs Waller: This book is set in London in 1909 and features all the wonderfulness. A female artist who is a feminist is the main reason that this one is so amazing. It's also cool to see what the early feminist movement looked like over the pond.

"Tsarina" by J. Nelle Patrick: This book gives us a good look into what the war was like that lead to the Romanov takeover in Russia. It doesn't focus on the royal family, so if that's what you're looking for, this isn't that. On the other hand I loved the detail that went into this book. There might also be a magical egg...

"Witchstruck" by Victoria Lamb: Do you like Tudor England, witches and political intrigue? Well, if that's the case, this one is for you. Princess Elizabeth even plays a large role and the court life is as interesting as the "way out in the middle of nowhere" life.
Well there's my list!  What's on yours?  I wanna know.  Leave your link below or tell me in the comments!
Posted by Bystander at 12:30 AM

Witchstruck and Tsarina both look fantastic, I'll have to check them out!
My TTT

Love this list! Historical fiction is one of my favorite genres. There are a few books I am dying to read from this list- Night and Fog and Blackbirds. I've heard good things about both books. Great list!

For the Love of the Page said...

Oh, I own The Diviners and I have a copy of Prisoner of Night and Fog on my ereader and Code Name Verity checked out from the library, but that's the closest I am to having read anything on your list... That's sad, isn't it? Great list!

I've never read any of these, but if you're into historical fiction, check out the "His Majesty's New World" series by Kenneth Tam, it's really good. :)

Chased By My Imagination said...

Ooooh some of these look creepy! I like creepy :)

Check out my TTT!

Katrina @ Chased By My Imagination

LOVE this list! I have Tsarina checked out at the library and am going to try to squeeze it in soon!